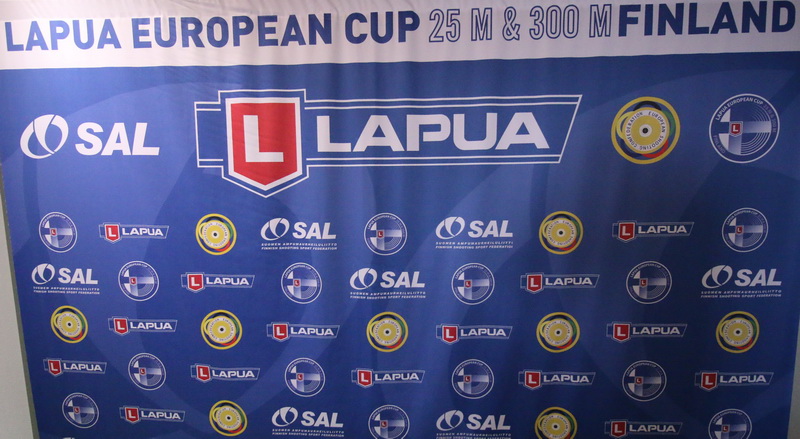 - It is a great honour to organize again the Lapua European Cup here in Finland – this is the second time when we have both disciplines and it might be the record of participation countries. We have at the moment 11 countries and about 120 starts. I wish that we will have exciting competitions but you will also enjoy our special banquette cruise, told the Vice President of Finnish Shooting Sport Federation Mr. Timo Laurila in his welcome speech.

The Finnish nature showed the whole possible scale of weathers during the competitions: wind, rain, calm and half cloudy and bright and warm sun, but that it doesn’t disturb the athletes.

We can nearly say that all the Rifle 300m Men competitions were the battle between Switzerland and Finland while all the brightest medals (gold and silver) were won by either Swiss or Finnish athletes. Honestly we must say that Swiss athletes were dominating the rifle 300m competitions. The best of the Rifle 300m Prone was Marcel Ackerman SUI with an excellent result 599 before Finnish Juho Autio who shot 598 points and Stefan Ahlested SWE (587). Switzerland won also the team competition.

In Rifle 300m Prone Women competition was won by the Estonian Valerie Shkabara (597) before two Swiss, Bettina Bucher and Myriam Brühwiler who both shot the same result 595. Bucher won silver by the better number of inner tens.

The Rifle 300m 3 x40 Men was ruled by the Swiss athlete. This time the winner was Olivier Schaffter with result 1153. The silver medal was won again by Finn Juho Autio (1146), the bronze medal winner was this time German Christian Dressel with 1145 result. The team competition was won by Team Finland.

The Organizing Committee organized on Saturday evening a lovely banquette cruise on the Lake Vesijärvi. There were organized also the awarding ceremony during that cruise. The athletes could admire a beautiful landscape in the sun shine while the sun does not go down in June and July in Finland.

The last competition day was windy and rainy. The circumstances were very challenging. The 300m Standard Rifle Men (3x20) gold medalist was the Finnish Antti Puhakka with result 583 before Swiss Olivier Schaffter (582) and Rafael Bereuter (580). The Women competition was the triumph of Switzerland while all medal traveled to Switzerland: The winner was Myriam Brühwiler, 581 with 24 inner tens. The silver medalist was Bettina Bucher, 581 (23 inner tens) Third was Andrea Brühlmann, with result 577.The best team in men competition was Finland and in women’s competition Switzerland.

The winners of Pistol 25 m competitions came from Germany and France.

The winner of Centre Fire Pistol was German Pierre Michel with result 583. It was a tight battle while the gold medalist, silver medalist French Florian Fouquet and Swiss Guido Muff both shot all the same result. Golf Pierre Michel with 27 inner tens, Fouquet silver with 22 inner tens and Muff bronze with 19 inner tens.

The 25m Standard Pistol king was Boris Artaud from France who won the competition with the difference of five points (571) before two Germans who shot the same result (566). Silver medal winner was Patrick Meyer with 18 inner tens before Michael Schleutter who managed to have 15 inner tens.