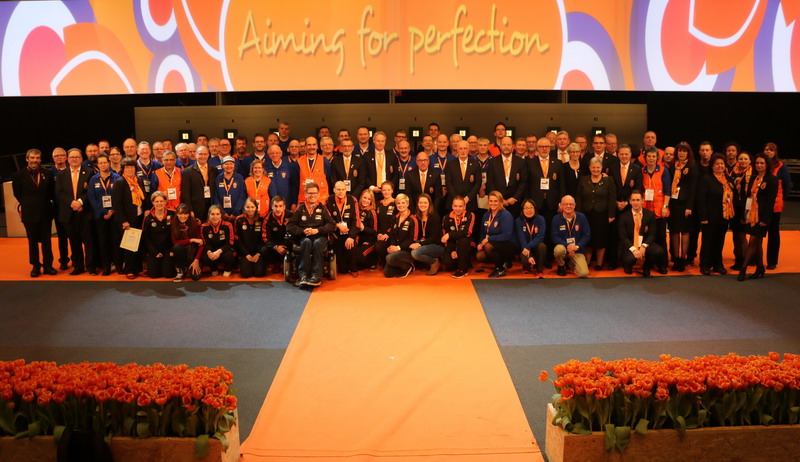 Before the Closing ceremony there were two Air 50 competitions competed, same kind as the Men and Women Juniors had. Teams consisted of female and male athletes. After the semifinals two best teams will battle in the gold match and then the following two ones – in bronze match.

In the gold match of Air 50 Pistol Team Portugal (Joana Castelao and Joao Costa) and Team Russia 1 met (Ekaterina Korshunova and Vladimir Isakov). After a difficult beginning team Portugal did not give any change to the Russian team 1. Portugal won the gold medal 5-2. In the bronze match Russian team 2 was superior against Serbia. The result 5-0 will tell the truth.

In Air 50 Rifle gold match met Team Serbia 1 (Andrea Arsovic and Milutin Stefanovic) and Team Croatia (Snjezana Pejcic and Petar Gorsa). It seemed in the beginning that Team Croatia would be stronger while it was leading already 3-1 but then happened something. The last four points were taken by Team Serbia, and they won the gold medal with the score 5-3. In the Bronze medal Team Russia beat Serbian Team 2 with the score 5-2.

During the week we have seen an excellent performance by excellent athletes – totally 574 starts from 43 nations.

Aiming for perfection – and the result is perfect

In his Closing ceremony speech the President of the Royal Netherlands Shooting Association Mr. Egbert IJzerman reminded that without over 130 volunteers, experts of shooting sport, technicians, designers and also sponsors and companies this kind of event could not be possible to organize.

- I would like to express my special thanks to all the volunteers who have dedicated themselves completely disinterestedly to this European Championship. By doing so, they have promoted the shooting sport in due form. I look back upon a marvelous European Championship. Our motto was “Aiming for Perfection”, and we have tried to create something new. We have tried to turn the Finals into a real show, by audiovisual means, meanwhile known as “the WALL”. Surely, also some mistakes had been made, but we have tried to solve them as quickly as we could. I think that we have succeeded in approaching this perfection, as have also witnessed by the great scores that the athletes had obtained. I'd also like to warmly thank the ESC, especially Mme. Ghislaine Briez, for great help.

- On behalf of the Presidium I would like to extend our warmest thanks and appreciation to the Royal Netherlands Shooting Sport Association and all the volunteers for the excellent job. The Federation is celebrating its 125th anniversary this year and has a long tradition of organizing big competitions. This is actually the fourth 10 meter European Championship organized here in the Netherlands, so the motto of the Championship – “Aiming for Perfection” – made perfect logical sense. The Organizing Committee was aiming high and after a week here in Papendal we can all see just how successfully that goal was reached. The Championship has been perfectly prepared and carried out in a setting of high tech combined with a charming Dutch touch. Here, in the Finals Hall, top level athletes have offered us memorable moments of excitement. Thank you, all the athletes, for competing in an atmosphere of friendship and fair play. From now on, Arnhem will also have a place in the European record list, after a new finals records was set with the Junior Men‘s Rifle competition. Records are always a proof of excellent conditions for the athletes. It certainly takes an excellent team to make a success, - thanked the organizers the ESC Vice President.

- Thank you – athletes and officials from all over Europe, I wish you all a safe trip back home and a warm welcome to the next European Championship to take place in Maribor, Slovenia, in July this year. The flag of the European Shooting Confederation will now be lowered and handed over to the Shooting Union of Slovenia. I hereby declare the 33rd European Championships in Arnhem, the Netherlands, 2015 closed.