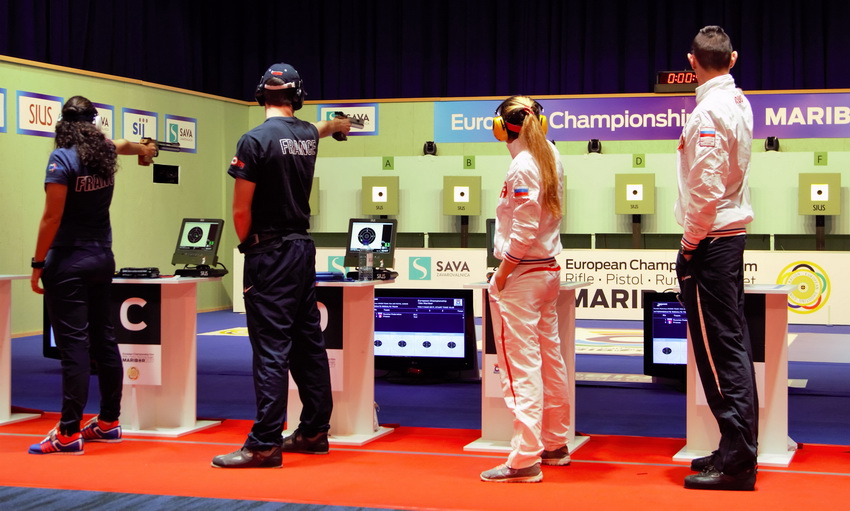 As we now one of the new competitions which ESC has created is the Mixed Team competitions. They became popular very quickly.

A team consists of one female and one male athlete. There were 17 teams participating in the Air Rifle Mixed Team event. Hungary, Czech Republic, Germany and Norway, Russian Federation, Finland, Serbia and Croatia have secured a place in the Semi-finals. In the first Semi-final competed Hungary, Czech Republic, Germany and Norway. In this Semi-final Germany managed to reach the place for gold match and Czech Team – for bronze match.

In the second Semi-final Serbia got the place in the gold match and Croatia – in the bronze match.

Team France reached the place to the gold match from the first Semi-final and from the second – Russian Federation. In the bronze match met Georgia and Italy.

In the bronze match Georgia won four first point and it looked like that they will take the bronze. But what happened? Italy woke up and won the last 4 shot. Situation was even 4-4. And next shot is the match shot. Georgia shot 19.4 and Italy rushed over with 20.4. Italy won the bronze with the result of 5-4.

In the beginning of the gold match it looked like that Russian Federation will take an easy winning so well they shot and took the 2-0 lead. France woke up as well in the third shot having made a small miracle by winning the next four shot clearly and took the whole match with result 5-2. The France team consisted of Mathilde Lamolle and Nicolas Thiel.