Running Target’s day of fully dedicated to the 2nd run of 20 shots of the mixed-event, awarding and Closing Ceremony! 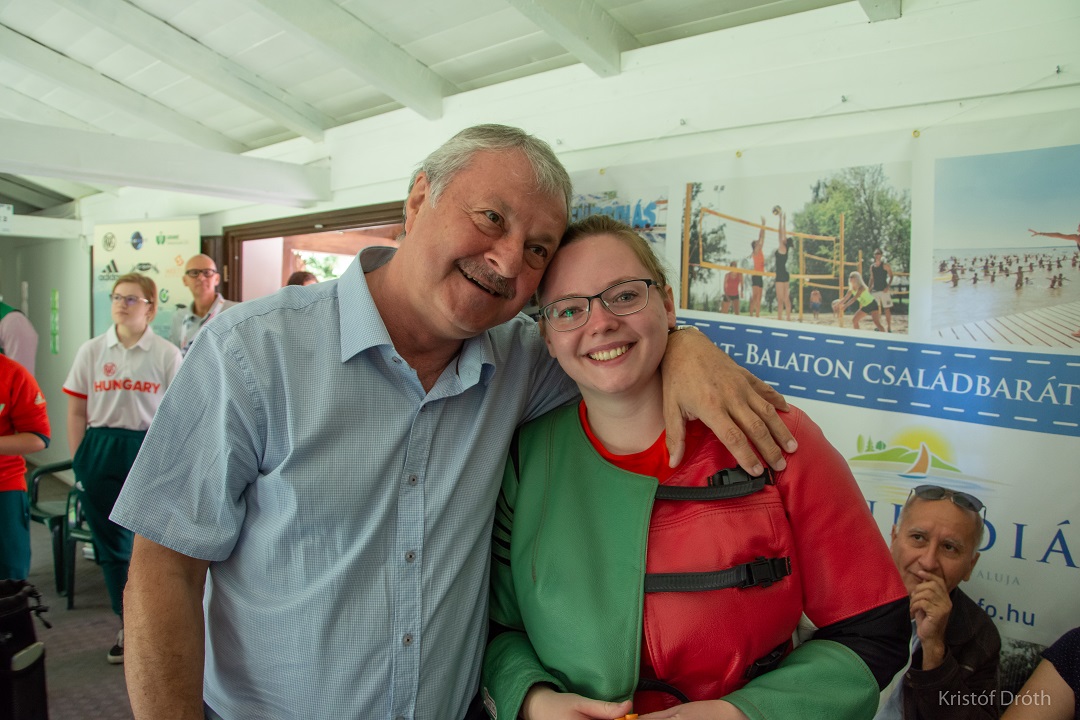 Women are used to start the first run of mixed; for today is their last run here in Gyenesdiás. Let us go to the results.

Veronika MAJOR (HUN) could confirm her leading position: she is gold for today, with a total of 380/400 pts. This is always a special emotion to win at home, so she has immediate tears of happiness. She is followed by Galina AVRAMENKO (UKR) with 377/400. Galina was very unsatisfied with her result; she said: “It is a bad result anyway, despite the second place.” It seems that for next ECH she intends to be in better shape. The third place is for Irina IZMALKOVA (RUS) with 375 pts, who was also not satisfied with her today result. Let us be kind with them: despite this first 50m ECH for women, they are competitors and always want to get through to perfection. I am convinced that our Shooting Family should be happy with these demanding athletes.

From the left to right, the “official podium” composed by 2nd place for Galina AVRAMENKO (UKR), the winner Veronika MAJOR (HUN), and the 3rd place for Irina IZMALKOVA (RUS).

Ukraine’s team catched up and exceeded the Russian’s just for 4 points: G.Avramenko/V.Rybovalova/V.Honcharova take victory with 1107/1200, followed by I.Izmalkova/O.Stepanova/J.Eydenzon representing Russia with 1103/1200. The Hungarian women are at the 3rdplace, V.Major/G.Kortvelyessy/V.Bedekovich collected 1056/1200 pts.

The podium of Women Mixed Team composed by 2nd place for Russia, the winner Ukraine, and the 3rd place for Hungary.

Now met us be interested by the Men’s second mixed-run!

The first four from yesterday’s intermediate result, maintained their leadership after the 40th shot. Let us discover now in what sequence.

From the left to right: the second E.Martinsson (SWE), and the winner L.Czapla (POL).

Lukasz CZAPLA (POL) was better than maintaining himself on the podium with 395/400 pts, he is the new European Champion. He said: “After the 30+30 I was angry, because I am feeling good. So I concentrated on the PET session to find back my roots to bring me back on track. Yesterday I was good, and I could confirm today, so I am very happy!”

Emil MARTINSSON finished at the second place; he shared with us: “Today I had too much nines in the slow run…”

The 3rd place has been awarded after the shoot-off between Ihor KIZYMA (UKR) with 20 pts and Maxim STEPANOV (RUS) with 18 pts.

So we got the completed podium at the awarding ceremony:

From the left to right: The second E.Martinsson (SWE), the winner L.Czapla (POL), and the third Ihor KIZYMA (UKR).

The Finnish team won gold with T.Hulkkonen/K.Holmberg/H.Lahdekorpi with 1167/1200 pts, followed at the second place by Russia composed by M.Stepanov/M.Azarenko/D.Romanov with 1160 pts. Sweden took the third place with E.Martinsson/J.Nyberg/O.Andersson with 1157 pts.

From the left to right, Team Men Mixed - the second Russia, the winner Finland, and the third is Sweden.

The Women Junior were hard with the spectator’s nerves: the shoot-off for the 1st place between Kristina HILEVYCH (UKR) and Ida HEIKKILA (FIN), the both with 373/400 pts; ending story with for the winner and European record of the discipline for Women Junior for Kristina HILEVYCH (UKR)with 19 pts, and 17 pts for Ida HEIKKILA (FIN)at the second place.

From the left to the right, The Women Junior Mixed podium: Russia, Ukraine, and Hungary.

From the left to the right, The Men Junior Mixed Run: the 2nd Max MARTINSSON (SWE), the winner Aaro VUORIMAA (FIN), and Mats ELIASSON (SWE).

The winner of this ECH is Aaro VUORIMAA coming from Finland, with 385/400 pts.

For the Martinsson’s Running Target is a story written in family; so Max MARTINSSON (SWE), copy/paste his father’s result to get the second place with 384 pts.

The Swedish Men Junior team consolidated his leading position to win the team ranking with 1146/1200 pts composed by M.Martinsson/M.Eliasson/A.Bergstroem. Just behind Ukraine’s team (D.Babliuk, D.Danilenko, R.Tovstopiat) got the second place with 1131 pts. Followed by German Juniors (K.Grossheim, T.Fass, P.Reuther) at the 3rd with 1124.

A special award of the more sympathetic athlete for voted by the referees, jury and Organizing Committee, has been offered to Kristina Zholudeva (RUS) for her kind sport behavior.

The Closing Ceremony was the moment to thank the ESC having nominated Hungary for the ECH organization; the Organizing Committee, officials, the main private sponsor which is the local forest Administration, all sponsors and all volunteers.

The ESC flag has been handed over to Pekka Kussisto, ESC Vice-President to hand over to the next ECH Organizing Committee in Italy.