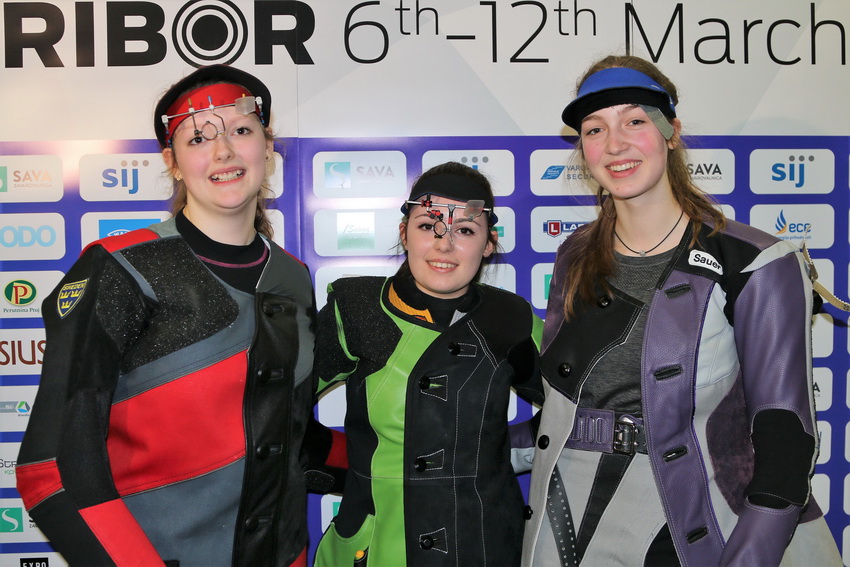 Young ladies performed a real show in the Air Rifle Women Juniors Final. These three medallists stepped on the podium for the first time. The winner after the very exciting and amusing Final was Jade Bodet from France. She bet silver medallist Isabella Johansson from Sweden. Johansson was leading before the last four shots by 0,2 point. Bodet shot three times 10.7 and 9.9 when Johansson managed to hit two times 10.0, 10,0 and 9.8. The winner of bronze medal was just 15 years old Anna Janssen from Germany competing in an international Final for first time as well. Bodet´s result is 249.1, and it’s a New European Junior Record!

«The Final was very exciting. For first time I participated in such a kind of Finals, and I was so nervous», described her feeling the new European Champion Jade Bodet.

The Swedish silver medallist was on the same level as Bodet. They couldn’t even nearly breath – so nervous both were!

«I knew all the time what the situation was. I can’t say yet why I’ve dropped in the middle of competition. Perhaps I was too nervous. Finally I decided that I didn’t have anything to loose and I decided shoot as good as I can and look how far it reaches. When I calmed down I recognized I made a comeback, it felt so fantastic», explained Johansson her competition.

The youngest medallist Anne Janssen had some kind of concentration difficulties in the very beginning.

«The Qualification went well, while I was prepared well too. But this start was very hard for me because of the big audience; I have not yet suit for this while this is my first time being here. Any way the result was good», sighed bronze medallist Anne Janssen.

The team competition of the Air Rifle Women Junior won Germany by beating Serbia with the difference of 1.4 point. The German team consisted of Anna Janssen, Verena Schmid and Jana Heck. The winning result was 1241.8. Silver medal winner was team of Serbia and bronze travelled to Italy.